Hello blogland!  It's another steamy day in NJ today, so it's a perfect day to stay inside and play!  Today I'd like to share a little card I made using the
Vintage Poppies digi stamp from A Day for Daisies for our
Anything Goes challenge at Crafting by Designs. 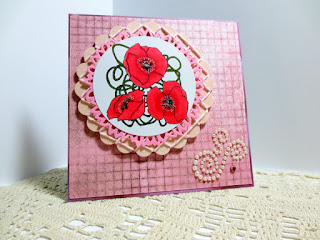 This digi stamp was so much fun to color with my copics, then I used some stickles in the center of the flower to give it a little dimension. 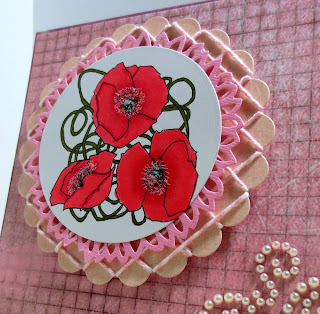 And just because I was in a pink mood when making this card, I took
some pink and white bakers twine and wrapped it around the scalloped circle on bottom layer because I thought it looked neat against the grid
pattern on the card base.  A little prima pearls and this card can
be used for just about any occassion.
Be sure to stop on over to Crafting by Designs this week and enter our Anything Goes challenge for your chance to win a few digi stamps from A Day for Daisies!
Posted by Doris T. at 12:24 PM No comments:

Hiya blogland!  This week we have a nice twist on our weekly challenge at Cuttin' and Stampin' - to CASE a project.
If you're like me, you've looked at crafty projects on Pinterest, and that's where I found my inspiration and CASE project.  Take a look at this beautiful project by Barb at Bug Bites: 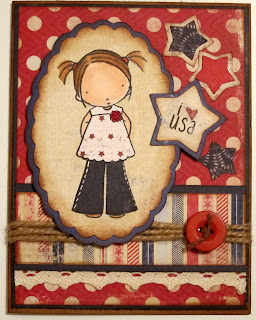 Isn't this card adorable?  I thought I had this stamp and maybe that's why I was drawn to this card, but the whole thing was just too cute!  Now take a look at my CASE: 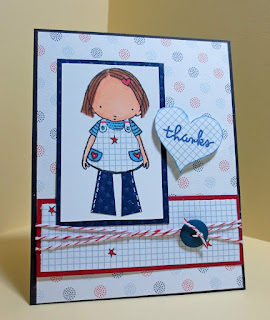 I chose to make it a Thank You card, but used red, white, and blue papers like the original.  I paper pieces her dress and added some blue paper to make her some pants like the original too.
Thanks for stopping by, and be sure to hop on over to Cuttin' and Stampin' and show us your CASE project!
Posted by Doris T. at 8:30 AM 3 comments:

Hello blogland!  I'm just on a roll with Father's Day projects this week :)  Today I'd like to share one more I made for this week's Anything Goes With a Twist challenge at Crafting by Designs.  Our twist is Father's Day, or Men/Male projects.  I had such fun making yesterday's project with my Silhouette Cameo that I decided to make a pop-up card for this challenge.  Take a look: 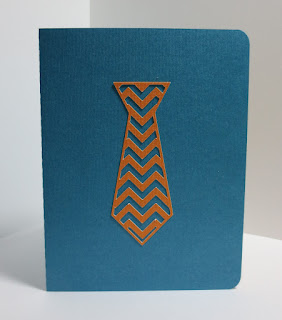 I kept the front of the card plain and used a chevron designed
tie as the only embellishment. 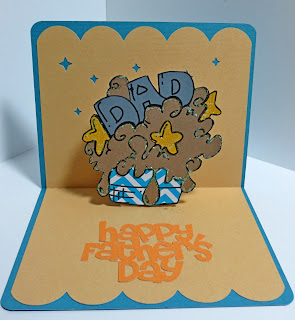 But once it's opened, it's a pop-up card!  I paper pieced this entire Bugaboo digi stamp and fussy cut all the pieces instead of coloring them. 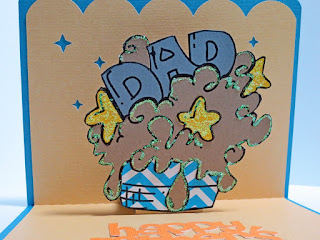 My only mistake with this little digi cupcake stamp was it was about 1/2" too big so I just trimmed the bottom of the cupcake paper and a smidge
off the second "D" in Dad. 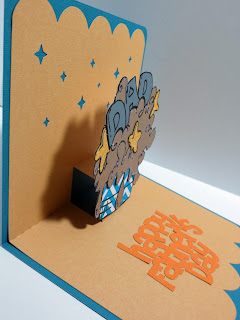 The Silhouette Cameo cut the perferation lines of the center which makes the Bugaboo cupcake pop right out when the card is opened.  Ba-da bing, I was finished in no time!
Be sure to stop over at Crafting by Designs and show us your Father's Day projects and have a chance to win some digi stamps from Bugaboo Stamps!
Posted by Doris T. at 9:00 AM 1 comment:

Getting ready for Father's Day

Hello blogland! Today's project I'd like to share is for this week's challenge at Cuttin' and Stampin' and the theme is Father's Day. Did you ever have an idea in your head for a project and knew just what you wanted to do, but it just didn't turn out the way you hoped? Yeah, that was me this week. I wanted to make a new version of a paper folded card for my husband that I made a few years ago, but no matter how I tried, it just wasn't working. So, I turned to my new toy, the Silhouette Cameo, and found a similar version to share with you today. 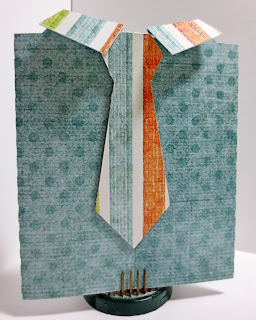 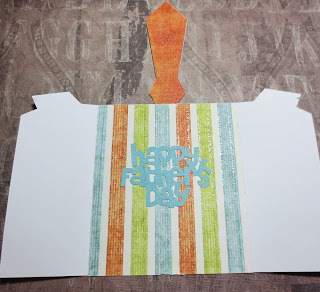 Now, you may laugh at my choice of colors and patterns, but my husband has this thing about blue shirts - he loves them, and most years at least one of the kids will get him a new blue shirt for Father's Day mixed with some other bold color. This was such a quick little card to make, and I really like how the Silhouette will make the perferation lines as well so I knew just where to fold everything, which was my problem with the first version I tried making.
Ok, your turn - show us your Father's Day projects by hopping over to Cuttin' and Stampin' and adding your submission by June 17.
Posted by Doris T. at 9:00 AM 2 comments:

Hello blogland! Today I'd like to share my project for this week's challenge at Cuttin' and Stampin'. When this project came up on our challenge schedule, the first thing I thought of was a layout to get my scrapbooking kick-started again. But that was the obvious choice, and I'm trying to push myself to go outside my comfort zone, so I decided on a special little project. 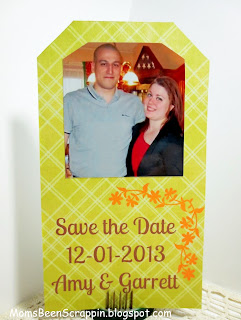 My daughter is getting married in December and we're getting into "wedding mode" lately. She had already sent out her Save the Date cards, but I wanted to make a special one and this is what I came up with. I kept it simple and used my Silhouette Cameo again with the print and cut feature, just added their picture and I was done. I have it hanging in my craft room and on the back I have a list of things the "Mother of the Bride" needs to get done soon :)
Ok, your turn - let's see your projects that include a picture. We'd love you to link up and join our challenge!
Go Here to enter your creations.
Posted by Doris T. at 10:00 AM 1 comment:

Proud to be part of 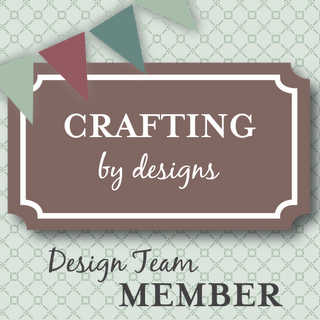 All content (including text, photographs, and design work) is Copyright © Doris T. Original artwork is shared for personal inspiration only and may not be copied for contest submission or publication. Nothing may be copied or changed without express permission from myself. Thank you for your consideration of this policy!!